There once was a mystical time when south east London was covered in dense green forest.  Today, as you wander these glorious green wooded havens of south-east London, do you wonder who and what may have walked before you in the Great North Wood? 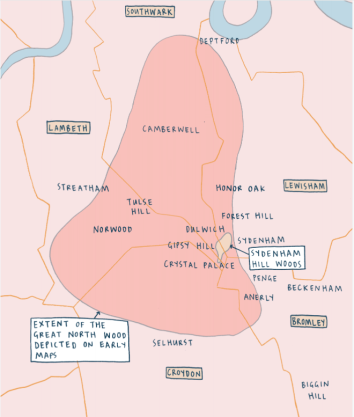 Forest Hill, Honor Oak are all names of south east London’s leafy suburbs that evoke the ancient woodland from which they arose.

‘England slumbered beneath a canopy of leaves’ – that is, until civilization began to take control of the land.  One particular forest stretched from what is now Croydon to Southwark and from Lambeth to Lewisham.  As people claimed ownership of this land they gave it a name:  The Great North Wood.

Over time, The Great North Wood was cleared and forest wood was called on to make ships; growing populations required land for farming; industrialisation allowed railway lines and roads to cut through the forest and invite people to newly-formed suburbs; war and rebuilding brought a new kind of destruction in the form of bombs and then concrete. 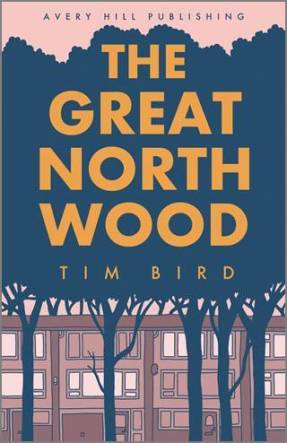 Now only small patches of woodland remain amidst south east London’s suburban sprawl. The forest whispers its mythical history through these patches and through names on maps: ‘Norwood’.

In The Great North Wood, Tim Bird amplifies the forest’s whispers, bringing to life its history and many legends.  We learn of the great oak tree (only a rusty plaque remains) that gave the name to Vicars Oak Road and of Margaret Finch, the gypsy fortune-teller immortalised by the name Gipsy Hill. We hear of the legend of Queen Elizabeth I knighting the great tree on a hill – now Honor Oak, but sadly no tree remains.

Through these legends and by learning about the disappearing Great North Wood, we come to understand what has been lost and appreciate the pockets that remain. The curious fox, London’s constant reminder of who was here first, leads us across Bird’s journey through space and time.

To be in with a chance to win one of two books, send your answer to the below question to southeastlondonblog@gmail.com or direct message us on Twitter @SELondonBlog.  Competition closes Sunday 10th June.

What was the name of the gypsy fortune teller immortalised by the name Gipsy Hill?

The story of The Great North Wood is stunningly brought to life through Bird’s beautiful storytelling and tender illustrations, published by by Avery Hill Publishing. The creator of Grey Area: From the City to the Sea – which won Best Comic at the 2015 British Comic Awards – and Grey Area: Our Town, Tim Bird is a master of using the comics medium to give us beautiful, quiet, understated stories that demand the reader’s careful consideration.

Published on June 20th, The Great North Wood will be launched at the famed East London Comics & Arts Festival.

Happy Sunday 🐶
This month the team talk to the guys @ignitionbrewery about sustainability in brewing, social enterprise and working and creating engaging jobs for people with learning difficulties. #selondonblog #supportlocal #sydenham #brewing @claireleonepr link in bio
This fish rocks - no pun intended - fresh crispy light batter nice one guys 👌 @thegeorgeinnbeckenham well worth it and then some for under a tenner.
Like mother like daughter (it’s okay I know she’s a dog) @thegeorgeinnbeckenham happy with a cold tipple after a lush swim @charltonlidolifestyle #sundayvibes 🏊‍♀️ 🐟 🍟